Cockroach Controlled Mobile Robot:
Control and Communication in the Animal and the Machine

This video overview of the project (featuring robot version #3) is also available as a higher resolution video file at http://www.conceptlab.com/roachbot/v3-vida09/hertz-roachbot-vida9sub45.mov (56.3M QuickTime File)

"Cockroach Controlled Mobile Robot" is an experimental robotic system that translates the bodily movements of a living, organic insect into the physical locomotion of a three-wheeled robot. Distance sensors at the front of the robot also provide navigation feedback to the cockroach, striving to create a pseudo-intelligent system with the cockroach as the CPU. This project is motivated by three key concepts: 1. Biomimetics, 2. The Cyborg, and 3. The Computational/Biological.

These three motivations are embodied in the mobile robot system, a platform that makes the intentions of the insect legible to a wide and diverse audience. Although technically and conceptually complex, the system is easily understood by young and old with little or no explanation. Individuals tend to watch the robot for extended periods of time, empathizing with the insect, and trying to discern whether or not the organism is controlling or being controlled by the technology... and whether it is aware of, immersed in, or pleased by its synthetic and mediated environment.

Development of this system began in January 2004. This robot first made a public appearance at SIGGRAPH 2004 (10 Aug 2004) and was publicly shown until December 2004. The system was built at UC Irvine with the patient assistance of Tom Jennings.

The robot had a lightweight frame and was (from a robotic perspective) a simple mechanism. 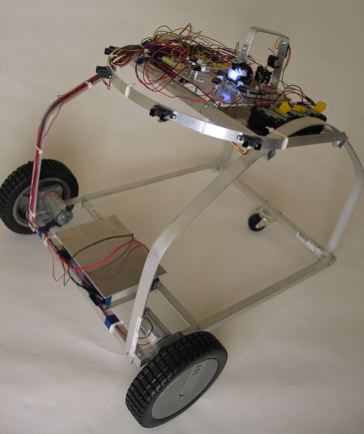 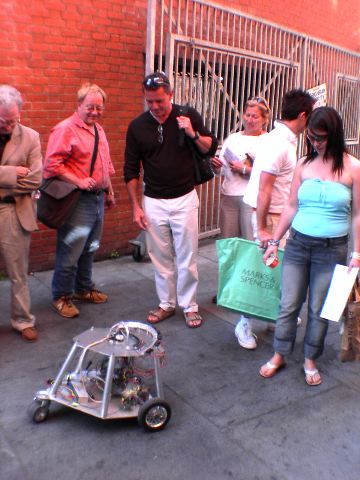 This system was completely redesigned and rebuilt from the ground up in Spring 2005. It operated on many of the same principles as version #1. This version had a new frame that could easily disassemble, aluminum "mag" wheels, better drive system, could go in reverse, had a new harness for the cockroach, and had double the feedback resolution.

This version kept the frame, rear wheel, cockroach harness, distance sensors and D200 motor controllers, but replaced the light-feedback display, drivetrain, wheels and axles. This work was done in August 2005.

Robot Operation: How Does it Work? 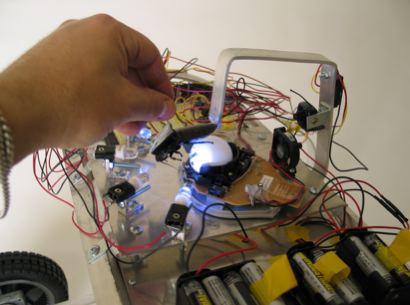 What do the lights do?
The lights encircle the front of the insect, and are designed to help the cockroach navigate the object away from obstacles. In theory, cockroaches don't like light: as you may know, cockroaches scuttle quickly underneath the refrigerator if the light is turned on when you catch them in your kitchen at night. The lights around the front of the cockroach control center are each hooked up to a distance sensor. As the robot approaches a wall, for example, the distance sensor will detect that something is close, and will send electricity to the light. The light will turn on, and will alert the cockroach before it crashes into the wall. The idea is that the cockroach will want to scuttle into a "dark" under-the-fridge-type region, and therefore steer the robot into a clear space.

Have you noticed the cockroach change its behavior because it's in the machine? How has it adjusted?
At some moments, it appears as if the cockroach is "adapting in" to the system. In other words, behaving in a way that would indicate that it thinks that the robot control system is "real". There are other times that it appears the cockroach couldn't care less about the lights shining toward it and seems to enjoy driving the robot directly into walls at full speed.

Does the cockroach control the system better than a computer would?
At this point, likely not - but it depends on how you define "better".

Do you have a computer or microcontroller on the system that is controlling the robot?
No. The system has no microcontrollers or "computers". The electronics are composed of two optical encoders, four analog infrared sensors, six transistors, two 555 timing chips, and some resistors.

The Cockroach On The Robot

Life as a Cockroach 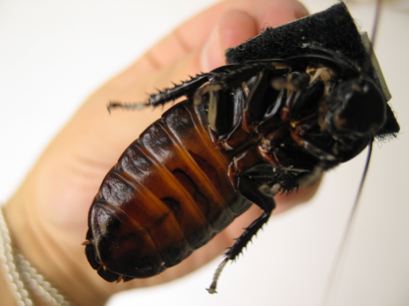 What kind of insect is it?
It's a Giant Madagascan Hissing Cockroach, also known as Gromphadorhina portentosa. The insect has no wings, moves relatively slowly and grows to a length of 5 to 8 cm. The lifespan of the insect in between two to five years. The females give birth to live nymphs (20-60) after 60 days of gestation, and they reach full maturity at 7 months. The insect is native to Madagascar, and leaf litter on the forest floor is its native habitat. Madagascan Hissing Cockroaches emit a loud hissing sound when agitated: it does this by forcing air out of a pair of modified spiracles in its abdomen.

Does the cockroach have a brain?
No. Cockroaches only have clumps of nerve cells called ganglia, which are positioned around their body. Cockroaches can survive for a number of days without their heads: they eventually starve to death.

Are there any legal, research, or technical restrictions with using cockroaches like this?
To the best of my knowledge, Gromphadorhina portentosa are not considered a pest insect in the state of California and there are no restrictions in raising, breeding, or keeping these cockroaches. From a scientific research perspective, cockroaches are not subject to the technical framework of a university animal research committee: animal research committees - who oversee university research involving animals - usually only care if you're doing work with vertebrate animals. For more on this topic, see my paper titled Ethology of Art and Science Collaborations: Research Ethics Boards in the Context of Contemporary Art Practice (10 pages, 60K PDF File). Images related to this paper can be found at http://www.conceptlab.com/ethology/.

Do you know of other similar art projects that use animals to control mechanisms?
Yes. In particular, two projects come directly to mind: Mark Pauline's Guinea-pig-operated 4-legged walking robot, and Ken Rinaldo's "Delicate Balance": a robotic system controlled by living siamese fighting fish.
Mark Pauline - founder and director of Survival Research Labs - built a guinea-pig-operated 4-legged Walking Machine that was operational between 1983 and 1985. It featured an on-board guinea pig that controlled the leg movements of the robot. From my recent conversations with Mark, he described that the guinea pig was trained to drive the machine by rewarding him ("Stu", as he was named) with lettuce. Although Stu was trained to enjoy entering the robot, during operation Stu would tend to position himself in a way that the machine wouldn't move. Video of this machine can be seen in the Survival Research Labs video "A Scenic Harvest from the Kingdom of Pain" available for purchase at http://srl.org/video/
Ken Rinaldo's "Delicate Balance" is a device with four fish bowls each containing one siamese fighting fish. These bowls were hung from two trusses that were controlled by the fish's body movements, and played with the natural response of the fish attempting to threaten or attack fish in adjacent (separate) bowls. More information about this project can be seen at http://accad.osu.edu/~rinaldo/works/mediated/

Are you familiar with similar projects done in a scientific context?
Yes. This work is directly inspired by scientific research in biorobotics: in particular the remote-controlled cockroach work at the Shimoyama Lab at the University of Tokyo in collaboration with Raphael Holzer. Within this project, the team was attempting to control the movement of a cockroach by implanting electrodes into their antennae. An Associated Press story that gives an overview of the research can be found at http://www.intercorr.com/roach.htm with the published paper titled "Behavioural Response of Insects to Electric Stimulation (Control of Insect Motor Function)" available at http://dmtwww.epfl.ch/~rholzer/papers/cbs.article.pdf with diagrams at http://dmtwww.epfl.ch/~rholzer/papers/cbs.ohp.pdf. 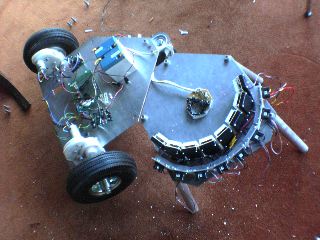 Rationale and Goals of this project